The Monster of Flathead Lake…not to be confused with Fathead Lake, that’s a story unto itself. 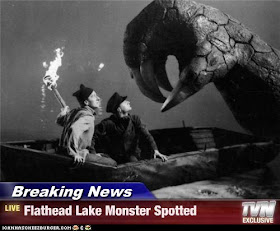 Throughout history the world over, tales of monsters and bodies of water have been synonymous with each other. Whether it is a lake, pond, river, ocean, stream…did I say stream??? How ever heard of a monster in a stream, a stream is so small…what is it a monster crayfish??? Ok back to the story at hand is again what I have said before, monsters and water have always been associated with one another and while there are storied of the past there will be more generated for years to come.  Now some of these stories are based within fact and some of these are based within the imagination of people who believe they have seen something that more than likely was not there in the first place. Are these people liars…no they just mistook something for something else…they could have seen a log floating in the water and from the stories they have heard over the years they believe it t be something not of normal nature. However there are those who in fact are liars and cheaters and report sightings for own personal gain and that 15 minutes of fame so many people in this world seem to try and go for. So with any story there will always be a certain amount of doubt and we unfortunately are quick to call someone crazy should they say they have seen something…and this is because of the bad apples whom have tried their deceptive craft. 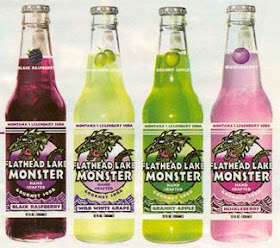 Now some of the more well known of monsters and water are such stories of the Loch Ness Monster of Scotland, Champ of Lake Champlain in New York, giant squids in the ocean, supersize fish and the list goes on and on…well this is a story of…well…nobody knows exactly what it is. The monster of Flathead Lake is located obviously in Flathead Lake which is located in Montana. Here is your fact of the day…this lake is the largest lake in the Western United States and in certain location is so crystal clear you can see straight to the bottom, now remember this fact as I tell this tale of water monster.


The exact description of the monster is like that of any monster story, there are always some differences, but   for the most part it is describe as an eel like creature, about 40 feet long and is a blueish-black in color. Some feel that it is a descendant of the Sturgis, the fish not the biker festival, and it supposedly has protruding humps, a lot like the Loch Ness monster and Champ. Its funny if you think about it how almost every single water monster has some sort of protruding humps…are they all from the same family of animal…or is there some unwritten code I am not aware of and Wikipedia has failed to mention in which all water monsters must have protruding humps??? I mean seriously, why do they all have protruding humps…for once I would like to hear about a water monster that has some giant claw like hand and seaweed covering it…you know the type you always see on Scooby Doo…like Swamp Thing. 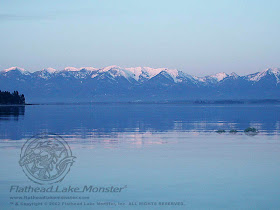 Ok back to the legend at hand with the Monster of Flathead Lake. The first sighting is told to be around 1889 by the skipper of a steamboat on the lake…have I mentioned this is a huge lake??? Well it would seem the he and his passengers witnessed this monster and one of the passengers had a gun on him and fired at it, which he didn’t kill it…must have been a bad shot. However this was said to begin the legend of this mysterious creature. So through the years even as late as 1993 many stories where told and it was supposedly filmed by a bank officer and a sales manager, because some how those type of people would never lie…might has well been a car salesman and politician reporting this sighting, but I digress, and witnessed to be a 12 foot long creature just below the surface of the water.

Now there are a number of theories of what this monster could be just there are theories for any and all water monsters. Now whether these theories are correct or not…well that’s why they are called theories…from the theory of it being an ancient dinosaur to that of being a mutant fish, or my theory that its not really there and it is being confused with something. Now I am an avid scuba diver and would love nothing more than to dive in a body of water and come across a true water monster, I know Im nuts…heck I want to dive with Great whites, anyways I really would love to see it, but I just don’t think it is there. Maybe someday there will in fact be evidence found of a great water monster, but right now I am unsure. I mainly question this legend because remember what I said earlier about it being so clear you could see down to the bottom…well don’t you think it would be pretty easy to find the monster since you can see the bottom and not have to worry about murky water and sonar and other technical gadgets to find anything in the water??? So I say to all keep looking out over the water and maybe someday you will catch that sought after evidence for all to see…or you can just look out over the water and enjoy the view and relax…your call.


Be safe and don’t forget your arm floaties,
Jon Bolton